Bruenor's people have fled their home, driven out by new threats that have come to claim the Crystal Shard.

Once you complete all three acts of  Companions of Icewind Dale you unlock the following Missions: 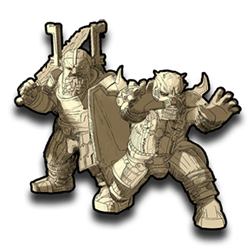 Goblins at the Gates

The united peoples of Icewind Dale had defeated Kessell's armies and destroyed his Crystal Tower.

But the dwarven warriors of Clan Battlehammer returned home to find their halls overrun, their people fleeing the valley.

We rushed to their aid, fighting our way through the goblins and verbeeg to find the goblin commander and put an end to this siege.

Halls of the Duergar

It was not the goblins that drove the Battlehammers from their halls. It was duergar. They came from the Underdark and had penetrated the lower Halls, exposing the dwarves to attack.

With the dwarven warriors off fighting Kessell, those dwarves who remained behind were no match for the invading duergar.

Before the Battlehammer Halls could be secured, we would have to seal the duergar breaching tunnels.

The duergar we faced were but an advanced force of legions on approach along Bangor's Span - the lone gateway to the Underdark.

Dwarven sappers had collapsed bridges and tunnels all across their domain, but they had been unable to reach the Span.

It was up to us. Destroy Bangor's Span and the duergar army would be safely stranded in the Underdark. But we would first have to face the elite force of duergar holding the Span's entry.