A powerful being has dominated some of the duergar stranded in Icewind Dale and has them mining chardalyn crystals and crystal remnant.

Once you complete all three acts of  Crystalline Dreams you unlock the following Missions: 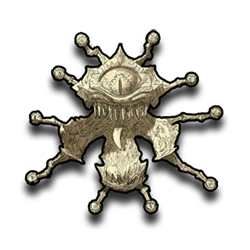 Chardalyn crystales are plentiful in the ruins under Kelvin's Cairn. Their magic once helped keep Kelvin's floating city in the clouds.

But now, duergar had moved in to mine the chardalyn from the city's ruins and were trucking it down deep into the catacombs.

Four runeswords controlled the entrance to the lower mines, and we would have to light them all to press deeper into the duergar operation.

The dwarves had long abandoned the mines under Kelvin's Cairn due to the toxic presence of crystal remnant - the remains of Kelvin's Crystal Towers.

Such concerns were of no mattter to duergar, nor to the cultists who had come to entreat with the being the duergar served.

We would have to run the gauntlet of duergar and cultist minions before we could come face-to-face with this entity.

Hadegorn was the name that echoed in our minds. It was what had dominated the duergar. An aberration. A beholder.

Hagedorn was combining chardalyn and crystal remnant, using its magic to form the materials into some sort of arcane device.

We would have to defeat Hagedorn and destroy the artifact it was trying to create: its own dreamed-up manifestation of the Crystal Shard.