Lore for Dark Alliance explores the story and setting of Dungeons and Dragons: Dark Alliance. Dark Alliance is set in the cold, harsh and dangerous region of Icewind Dale, and features famous characters from R.A. Salvatore’s novels. The story follows the Legendary Drizzt Do’Urden a male drow ranger and his allies from the Companions of the hall, Bruenor Battlehammer a dwarf warrior, Catti-brie a human archer and Wulfgar a human barbarian.

All Lore in Dark Alliance

Dark Alliance takes place in the frozen region of Icewind Dale and is set after R.A. Salvatore's book The Crystal Shard, released on 1988. Players are tasked to fend off monsters set to overwhelm the Dale in search of the mighty Crystal Shard. It is up to the four playable characters to prevent this.

Icewind Dale, the frozen area located in the north of Faerun, is home to this epic adventure. Prepare to experience all the hardships of a hostile zone such as the Dale and don't forget your coat!

In Dark Alliance, you can find various Collectables that enrich the experience by telling past deeds or events that shape the world and allow for a better understanding of what's currently going on in the Dale. For more information about them, check the Collectables page.

Bruenor is the king of Clan Battlehammer. He is the last surviving member of his clan to have lived in Mithral Hall, their original stronghold. The dwarves were driven from their home by some dark force and Bruenor lost his father, Bangor, and grandfather, Garumn, who died giving their people time to escape.
Bruenor barely remembers his time there, but he imagines it as the ideal of dwarven culture and accomplishment. He plans to return to Mithral Hall, though no one remembers where it is. Bruenor projects a gruff demeanor, but he cares deeply for his people and his adopted family - Catti-brie, the human girl he saved as a babe during a goblin raid, and Wulfgar, the barbarian boy he defeated on the battlefield, and then took as his prisoner to raise like his own son for five years.
Bruenor respects the autonomy and choices of his friends, but feels a need to protect them from danger, even when they've brought it on themselves. He extends his fatherly sense of responsibility over his clan and even the people of Ten-Towns. His sense of responsibility means Bruenor takes a lot on his shoulders, even responsibilities that aren't necessarily his to bear. 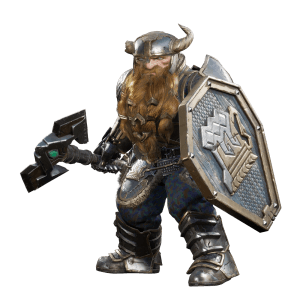 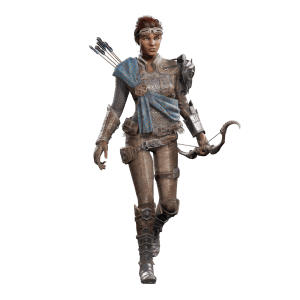 With sharp arrows and sharper wit, Catti-brie Battlehammer has the sights of her bow set on history. This bold human fighter aims to become a world-class adventurer with heroic deeds worthy of the bards' songs.
The human Catti-brie was adopted by Dwarven clan leader Bruenor Battlehammer, and grew up as resilient and outspoken as any dwarf of his clan. Surrounded by friends and family who will live for centuries, she's keenly aware of her short human lifespan. Catti-brie plans to pack centuries of heroism into the time she has, and to seize the respect and remembrance she deserves.
Catti-brie is an eagle-eyed ranged fighter with a tactical mind. Deeply moral, Ceti-brie is often the Companion knocking sense into her allies. She's not afraid to stand up for what she believes in, and she also knows when a well-placed headbutt will finish the job.

Raised in the sadistic underground cult of the evil goddess Lolth, the drow elf Drizzt Do'Urden sacrificed everything to escape the Underdark and flee to the surface.
Without allies or knowledge of the lands above, he is relentlessly pursued by members of his own family—who thirst to punish him for betraying the dread Queen of Spiders. Uncertain of who he can trust under this wide, unfamiliar sky, Drizzt ranges the frozen tundra of Icewind Dale alone—save for Guenhwyvar, a powerful panther spirit whom he summons from the Astral Plane for aid.
Folk in Ten Towns speak uneasily of this solitary stranger on the slopes of Kelvin's Cairn: are his flashing swords and lavender eyes aimed at the wild creatures of the Dale? Or at them? It is not until Catti-brie Battlehammer—a brave, young, human woman from a Dwarven clan-befriends him that he begins to see the life he had dreamt of underground.
To survive the next conflict with Kessell and the Shard, Drizzt will need the trust and skill of every ally he can muster—and even that may not be enough.. 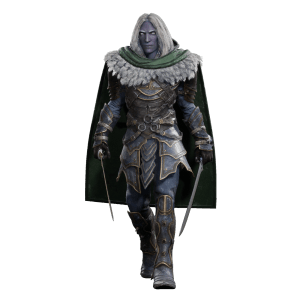 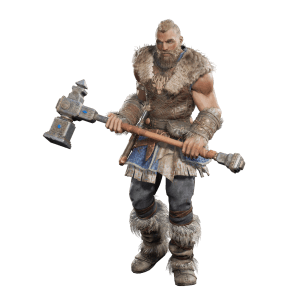 Wulfgar is a Reghed barbarian from the Tribe of the Elk. He was part of the Reghed horde that attacked Ten-Towns five years ago, where he was defeated, captured by Bruenor, and kept as Bruenor's prisoner for five years. Though he felt humiliated by his defeat and capture, five years with the dwarf king irreversibly changed him.
Wulfgar gained an appreciation for the wider world and the diverse people within it, though he still prefers a direct approach to most issues. Regardless, thanks to his time with Bruenor, Wulfgar saw a better path for his people. When he learned that Akar Kessell was leading an army against Ten-Towns and that his people planned to join the assault, he challenged Heafstaag for leadership of the Reghed. He defeated his former clan chief and led the Reghed warriors to the aid of the people of Icewind Dale.
Wulfgar loves his people and hopes that he has led them to a better life, but he has a wild heart and a desire for adventure. He will be there for them in times of need, but until then he will seek excitement and new experiences with his friends.