A goblin named Hamboog claims to have found the Shard and has taken over a part of the Dwarven Valley where his horde is building him a Crystal Tower.

Once you complete all three acts of  The Goblin's Shard you unlock the following Missions: 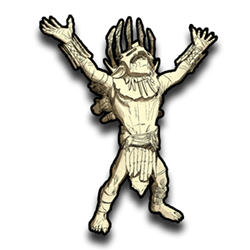 Goblins had begun constructing a tower to secure their foothold in Bruenor's home, and had spread out from that stronghold into the Dwarven Valley.

The first step to clear out the goblins was breaking into the goblin fort guarding the entrance to Rugrib's Quarter.

We would have to recover explosives to blow our way through their fortifications and then take out the foreman and his verbeeg enforcer.

Emperor Hamboog, he called himself. This goblin claimed to have found the Shard, but what his goblin horde was constructing was no Crystal Tower.

There was only one way into the canyon where Hamboog was building his tower. Its entry was held by Goffin's Door, but the door's runestone locks were scattered across Rugrib's Quarter.

And so before we stormed the tower, we would recover the runestones, engage those locks on Goffin's Door, and seal Hamboog in.

We had sealed Hamboog within his canyon, but left unchecked, he would eventually break free.

If that happened, all of Ten-Towns would suffer raids from his goblin horde. And so now was the time to assault his throne room.

Once Hamboog was defeated, we would tear down his tower and restore dignity to at least part of the Dwarven Valley.